Over the last week Alberta experienced an annual peak demand of 11,401 MW on February 1, 2019 between 5 and 6 pm. It is instructive to see how wind and solar generation responded.

The ability to generate during high load periods has had an effect on the average prices received by various generation types over the last week. Both wind and solar fared relatively poorly when compared to other types of dispatchable generators. As is often the case wind generation received the lowest average price for energy at $59.6/MWh. Solar did better receiving an average of $128.6 per MWh. But the real winner was imports which received an average of $262.9 per MWh. Hydro did second best at $226.2 per MWh. 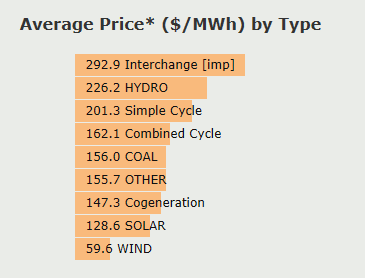 The last week shows how the inability of solar and wind generation to respond to high load periods can play out and highlights the need for backup resources.

One response to “Wind and Solar Generation Meet Peak Load”