Over the summer we have experienced several hours where prices have spiked upwards to several hundred dollars per MWh. At the same time we can observe that during these price spikes there was usually hundreds of MW of un-dispatched capacity remaining in the energy merit order. In these instances no actual shortfall of capacity existed, no firm load was interrupted and reliability was not an issue. So were prices too high?

Alberta has an energy only market. That means that generators have to recover all their costs through energy sales alone. These costs are not only the variable operating and maintenance costs such as fuel but include fixed costs such as the cost of capital tied up in the generator. Capital costs include cost of servicing and repaying debt and the cost of servicing and repaying equity invested in the generator.

If generator offers are restricted to their variable operating and maintenance costs, then prices will only rise when actual scarcity exists and reserves are surrendered or load is interrupted. For most generators to fully recover their fixed costs this scarcity would have to occur much more frequently (potentially over a hundred hours a year) than what has been experienced in the past. Importantly the reliability of supply would have to deteriorate significantly before prices rise to the point that generators recover all their costs.

In Alberta generators are allowed to offer their energy at whatever price they desire (up to the price cap). This means that periodically prices will rise even when no physical scarcity exists. Importantly this allows new and existing generators an opportunity to fully recover their fixed costs without the need for system reliability to deteriorate and load actually be interrupted. Of course if prices rise too much other generation will be built in anticipation of profits.

So are prices out of line? This is hard to say but the Market Surveillance Administrator (MSA) in its most recent quarterly report looked at whether prices overall have been sufficient for new generators to recover all their costs and whether prices are high enough to allow new generation to be built [1]. The MSA calculates what the revenues less the variable and fixed costs of a hypothetical new generator would have been since 2016.

Here is what the MSA said,

Figure 34 shows the monthly net revenues for the hypothetical peaking unit since 2016. The net revenue figures are consistently negative for 2016 and for most of 2017. Despite the low gas prices during this period, pool prices were not high enough for the unit to earn sufficient revenues to cover its fixed costs. In Q2/18 the net revenues were significantly higher, particularly in May and June, as pool prices increased, gas prices fell and the plant would have been able to earn an increased margin on its generation. The estimated net revenues were approximately $1 million for both May and June. In Q2/18 the hypothetical peaking plant earned a 3.36% return on its capital costs from the net energy revenues. This return is equivalent to about 13% on an annual basis and likely would incent a commercial entity to make an investment.”

The MSA’s graph is shown below. 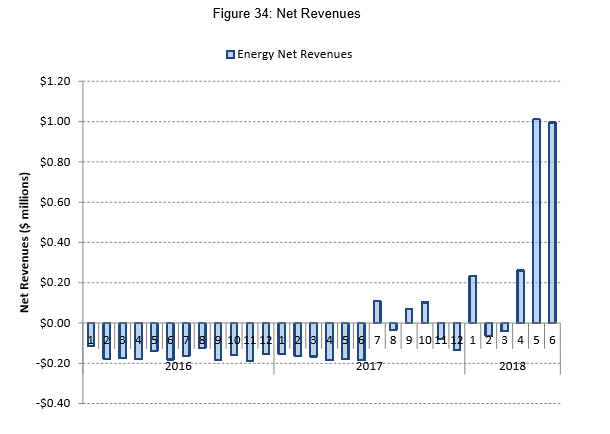